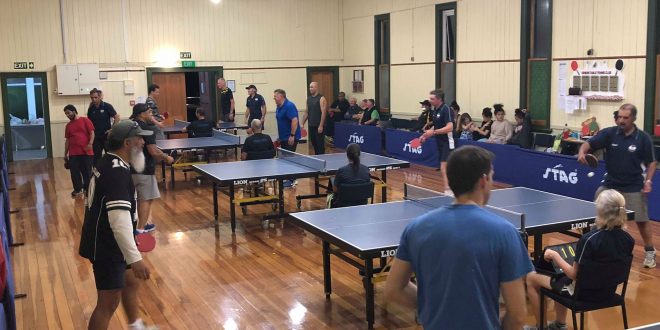 Table Tennis is booming within the Waipa Community at Kihikihi Table Tennis Club in 2018. It has been a great start to the season with great numbers attending every Tuesday Night. We have players travelling from Hamilton, Pirongia, Otorohanga and Cambridge this season to compliment the talent of our local players.

After losing to Matamata Table Tennis Club for the past 3 consecutive years in the 3 match series, it was going to be a great challenge for the club in 2018.

Kihikihi was able to field their Top 15 players within the club, with strong players throughout all 5 tables for the night and this was evident when some of Kihikihi’s higher table players were playing on lower tables due to the depth of the club this season.

One of the featured Kihikihi players of the night was 70 year old Terry O’Carroll, who is currently ranked Number #5 within the Club. O’Carroll was a former NZ Representative Table Tennis Player in his younger days and still maintains his competitive edge within the community.

O’Carroll had some Marathon Matches through the night, overcoming Lyall Wilson 17-19, 17-15, 11-9, in a highly intense competitive game between the two players. O’Carroll then faced Phil Towler who has a very difficult style to play, but O’Carroll overcome Phil in an epic 5 set match winning, 11-9, 11-2, 8-11, 9-11, 11-9. O’Carroll only lost to Matamata #4 ranked Spanish player Victor Cuba.

The highly contested A Grade table had one new addition to Kihikihi for 2018 with Hyrum Sunnex, Johnny Ainsley and new recruit Ezra Heke who has just moved over from Australia representing the club.

Matamata who have dominated this table for the past 3 years with Former NZ Women’s Player Armindeep Singh and former Waikato Players, Jatinder Singh and Shane Quigley were up for the challenge.

Heke made the difference in the A Grade battles, as he was able to upset the former Waikato Players  of Quigley and Jatinder Singh with his only loss to Armindeep in a closely contested match. Sunnex also played into form this season, winning all his singles matches in straight sets.

Kihikihi looks forward to the up and coming Waikato Country Clubs Championships Tournament in Hamilton and Game 2 in Matamata on June 11.

New Players are welcome to join club, our season ends at the end of October, for more details visit www.kihikihitabletennis.co.nz or phone 0210687017.