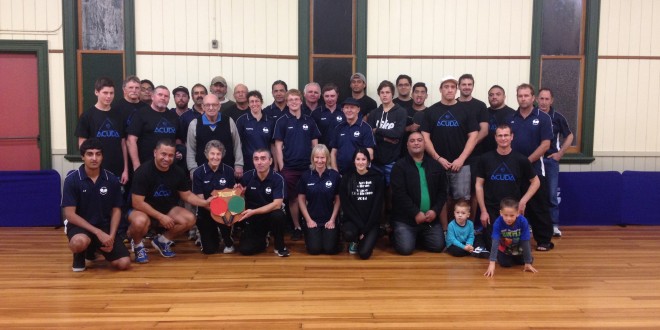 After losing the 2nd match in Matamata over a month ago and getting completely annihilated 48-12, it came down to the decider for the 2014 table tennis series where Kihikihi were the victors winning 40-20.

Neither team in the past two years has beaten each other when travelling to the opposition’s venues, and Kihikihi was not going to allow tradition to change for 2014. Kihikihi picked its strongest 15 players to play in the decider, but the night did not start very well for the home side with Andrew Mahara pulling out due to rolling his ankle earlier in the day practising for Table Tennis and Alba Yoon falling to the Flu. Luckily the club’s reserve players were on hand to take their place.

Because of the heavy beating a month earlier from Matamata, Club President & Coach Hyrum Sunnex decided to prepare some of his players for this deciding match by using their Club Table Tennis Robot to assist in repetitive ball motions with various spin modes to help his players learn how to master various playing styles.

A lot of the club’s players took advantage of this technology that the club has available and the players benefited also from the extra coaching.

This clearly showed throughout the night with Matamata Club President Lyall Wilson acknowledging in the concluding speeches the major improvement of many players in the Kihikihi Club over the past 4 weeks since they last met.

The Feature match of the Night was once again between the two former Waikato representatives Hyrum Sunnex (Kihikihi) and Jatinder Singh (Matamata), they did not disappoint with another match going right down to the wire. Sunnex trying to keep his unbeaten record intact for the season saw a see saw battle eventuate for the first 4 sets, 11-8, 6-11, 11-6, 8-11.

The final set saw Sunnex make a number of mistakes and was clearly under a lot of pressure from Singh’s heavy and consistent pushing abilities, where Singh jumped out to an 8-4 lead with Singh on Serve.

Sunnex was not looking confident at all even with his fellow club members trying to rally for support, so he decided to go for broke and just attack anything Singh hit over, with this new found confidence and momentum shift, Sunnex won 7 of the next 8 points to win the final set 11-9 and the match.

The Table Tennis Season is half way through and ends on 27th October 2014. Club Nights are on Mondays at 7pm – 9:30pm. New Players are welcome, for more details please visit www.kihikihitabletennis.co.nz or phone 021 068 7017.