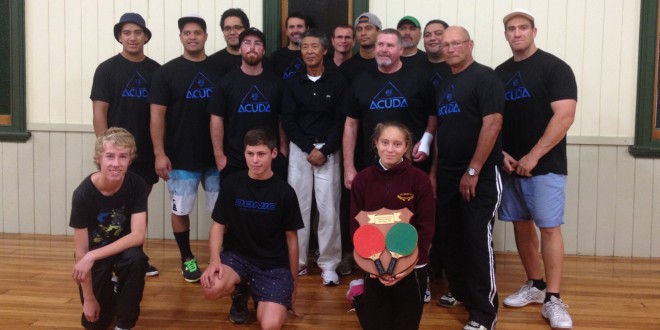 Kihikihi Table Tennis Club made a positive start to the season winning the first of three interclub matches against Matamata 35-27. It was just the start to the series that Kihikihi had hoped for after losing 2-1 to Matamata in 2013.

The club has some new players to offset the loss of one of their strike weapons, Darin May, who has moved back to his homeland in Australia for family and work commitments. Match of the night was the A grade showdown between Hyrum Sunnex (Kihikihi) and former Waikato representative Jatinder Sign who has joined Matamata this season.

“It was a great match, I got lucky on a few points that could have gone either way, we always have great matches regardless of the scoreline,” says Sunnex, who went through the night unbeaten. Singh had earlier beaten Sam Roa 11-2, 11-7 and Alba Yoon 11-3, 11-2.

The Table Tennis Season is from April to end of October 2014. Club Nights are on Mondays at 7pm – 9:30pm. New Players are welcome, for more details please visit www.kihikihitabletennis.co.nz or phone 021 068 7017.