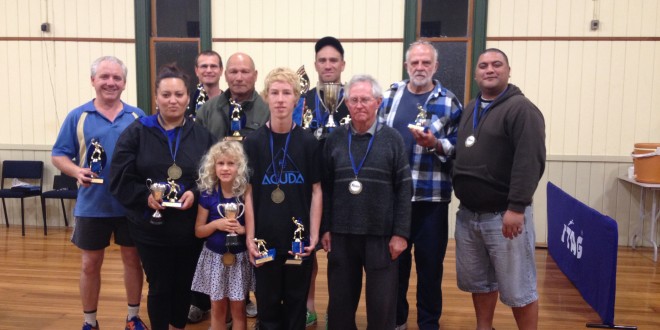 Prizegiving Ends Season on a High

In the club’s first successful season from being resurrected from non existence in over 12 years, the new revised club successfully held their first club championships over two weeks that ended with their finals last night and their annual prize giving for the Senior Players and the Junior Players.

This event was attended by over 70 people that included the players and some of their families. What was a spectacular view and array of awards and trophies for any club to be in awe of, was setup by a spectacular season of committed people who had a goal back in April to not only promote this sport and run the club in a professional and effective way, but also to promote the town of Kihikihi and support the township and community.

The car parks and main road were always full on Monday Nights and last night for the finals night, the streets were full of cars and can only be good for the community moving forward.

There were some upsets last night with Waiata Nore who has never lost to Hayden McFie throughout the regular season, going down 3-1 in the E Grade Final. James Krippner who only a week earlier in the round robin club matches lost to Bill Maru, overcame the loss a week later and beat him Bill convincingly 3-1 to take out the D Grade Final.

In the C Grade Final it was a one way motion for Andy Baker, who went through the round robin a week earlier undefeated, and convincingly won 3-1 to take out the C Grade Final vs Don. Sam Roa won the B Grade Division a week earlier. For the final match of the night due to some miscommunication and un preparedness, an upset was made by Darin May who defeated Hyrum Sunnex in the A Grade Final, in which sunnex just could not compete with May this time around.

Other award recipients were as follows:

The night ended with a wonderful pot luck dinner that was a great selection of nice food provided by all those who attended, the club wishes to thank the Waipa Council and local Community Board for all the support it has given this season in various ways, Hazel Barnes for the help to get this off the ground and also the Te Awamutu Courier who has provided outstanding media coverage for this suport and club.

We look forward to next season commencing End of March 2014. We welcome all new and old players to participate in 2014. More details to follow next year.