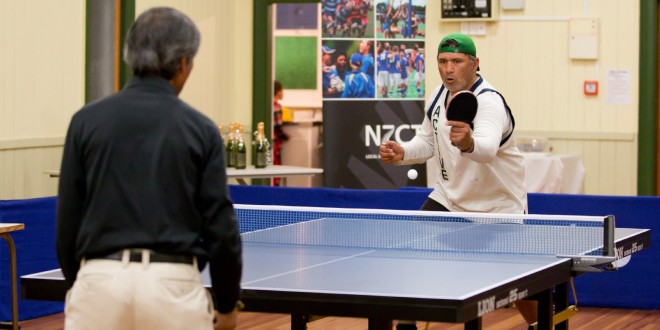 In the club’s second consecutive season from being revived since 2002, the 2014 season came to an end recently with their Annual Club Championships.

There were many moments throughout the season that enabled the Club to grow. The Kihikihi Club won their Tri Series Interclub competition versus Matamata 2 -1 and are now holders on the KKTC & MTTC Shield.

They continued this momentum and won away from their home club when they visited Manawaru Table Tennis Club who boasted some Waikato and former New Zealand representative players and won the newly contested annual shied from them as well.

The club also received some great funding from New Zealand Community Trust to allow them in purchasing five top of the range table tennis tables to allow their players and visitors to play on faster and more consistent tables.

Membership continued to grow this season, with new players joining the club from Hamilton and Cambridge and travelling out regularly to participate in their Organised Club Play and Interclub Matches.

The car parks and main roads were always full on Monday Nights and can only be good for the community and the club moving forward, which led to our finale for the season.

There were some great matches throughout the night with upsets once again looking likely. First up for the night was the D Grade Final between the Veteran Denis Fouhy and the Clubs Top Junior Player, Isaac Milne. The match was very close and could have gone either way, but Milne made some critical serving errors in the final set, to allow Fouhy to win the Match. Fouhy was upset last year by Hori Barton in the finale, so it was bitter sweet to win this year 2nd time around.

In the C Grade final, first time club finalists, Turongo Mahara and James Krippner contested the finale, with Kripper being the dark horse coming into the finale, who had upset a few players who are ranked much higher them himself.

Mahara was confident in winning this match but Krippner would not give it to him easily, but Krippner unfortunately gave far too many points away from faulting a lot with his service on pressure points, which allowed Mahara to close out this match and win his first Club Title.

B Grade Final as expected boasted two of the club’s top players, Sam Roa and Alba Yoon. Roa who has never loss to Yoon in regular club season, was also confident in taking out back to back B Grade Titles for the club, but Yoon who has dedicated extra practise throughout the season, with the Clubs Table Tennis Robot, had a different mindset.

Heading into the deciding set of the match being 2 -2 (best of five), Yoon found himself 1-6 down and Roa with lots of confidence to finish the match, but all of a sudden, momentum quickly changed and Yoon had a new form of confidence going for every winner at will and won the match and the B Grade Title for 2014.

Final Match of the night was between the two former Waikato Representatives and the Number 1 & 2 ranked players in the club, Hyrum Sunnex & Andrew McConnell. Both have completely different styles and techniques and have always had greatly contested matches throughout the season.

Unfortunately McConnell, couldn’t get his rhythm tonight and was beaten by Sunnex 11-4, 11-7, 11-6, 11-9 in straight sets. Sunnex finished off a great season for the club, going through the year undefeated in the Interclub Season, and also in the organised club play.

Sunnex received a special recognition award from the Club Members to show their appreciation for the time and effort he has put into the club, acting as Club President in organising Successful Funding Grants & Applications over the past two years to ensure the club has all the latest and modern equipment to allow the club to move forward in the future years to come.

James Krippner mentioned “That Sunnex is the Kihikihi Club, and without him we definitely would not have what we have now in our club and we should be greatful for what he has done over the past two years”. Sunnex replied to the membership and Krippner, that he would be stepping down next season as President, as he may be moving overseas at some stage next year and mentioned there are great people in the club who can take over from what he has developed for the club moving forward.

The last mark that Sunnex would like to leave for the Table Tennis Community is to host the first ever National Rural Club Championships here in Te Awamutu for 2015. He has already touched based with many clubs throughout New Zealand who are very excited about this opportunity, and just needs to put certain things and dates in place to make this happen.

This will be held at the Te Awamutu Events Centre over 3 days, dates still to be confirmed.

Sunnex said “If I can pull this off, it will be massive not only for Table Tennis in Waipa, but for table tennis in general throughout New Zealand.”

Generally Table Tennis is only focussed on the City Clubs, yet there are probably more players in the hundreds of Rural clubs throughout the Country who enjoy and play this sport regularly.

The Kihikihi Club looks forward to next season commencing End of March 2015. We welcome all new and old players to participate in 2015. For more information please visit www.kihikihitabletennis.co.nz