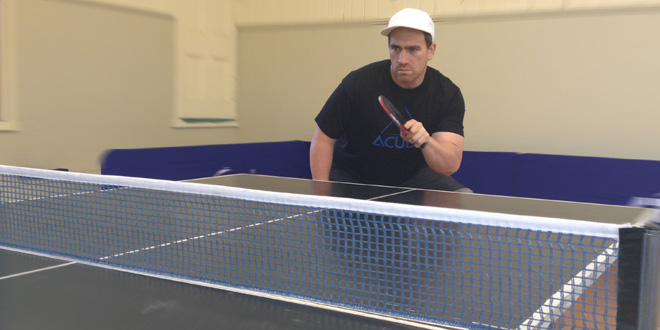 The highlight of the night was the Main Draw, with expectations of high quality table tennis displayed throughout the night. Visiting A Grade Players from Hamilton Johnny Ainsley, and Waikato Table Tennis Club President Trevor McGaughran entered the main draw, with Local Favourites Hyrum Sunnex and Darin May hoping to ensure the title remains local.

Sunnex has been recovering from a snapped Archilles Tendon that ocurred back in early June this year while playing rugby for Te Awamutu Sports and has been hampered by this injury only allowing him to play while kneeling on a chair each week. But now that he is in a moon boot with more flexibility and motion, he is able to compete much better at a higher level.

Sunnex felt that he could not beat Ainsley and May heading into the tournament but would give it his all, and hoped that his service game and backhand which are his main strengths could see him through.

In the main Draw through Round Robin play, Darin May defeated Ainsley (11-6, 8-11, 11-9, 11-8), and it was up to Sunnex to defeat Ainsley to force the final between May and himself because of points differential occurred in round robin play between the other players. Sunnex was able to upset Ainsley and setup the final between the two local players.

Sunnex started strongly in the first set winning 11-7, but Darin came back winning the second 5-11, Darin had the chance to win the third set being up 8-10, but Sunnex kept calm and was able to win 13-11. The 4th Set was all Sunnex as Darin made too many unforced errors, and the score blew out to 9-3. Even though May fought back to 10-8, Sunnex kept calm and won 11-8 and the A Grade Title was his.

Visiting Te Rore Player John Thompson went undefeated taking out B Grade and showing some of the local players his full range of skills and serving techniques defeating up and Coming Youth Player Turongo Mahara 9-11, 11-8, 12-10, 11-7. C Grade Title went to James Krippner who battled it out once again in an epic 5 set thriller against Terry Lasenby. D Grade Winner Hori Barton defeated Denis Fouhy in the final, after being beaten in pool play from Fouhy in straight sets and only making the final on a count back points system due to 3 players ending the round robin on similar points. One would have to feel for Fouhy as he went through the night undefeated only to succumb at the final hurdle. The final winner of the night was youth player Lukas Nordell who beat Hayden McFie in the E Grade Final.

It was a wonderful night, with some high quality table tennis being played, and amazing prizes sponsored by Donic New Zealand. It was also great to have the support from other clubs and Mr Sunnex hopes that next year’s Kihikihi Open will be bigger and better next year.

The Club season is now  at the halfway mark and ends at the end of October 2013, new players are still welcome to join and participate. Adults on Monday Nights, Youth and Children on Wednesdays please see our website for more info or contact Hyrum on 021 068 7017.